ResourcesWolf-deer research in the Superior National Forest of Minnesota 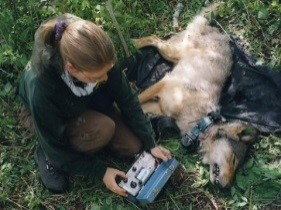 The Superior National Forest (SNF), Minnesota, USA Wolf – Deer research was started in 1966 by Dave Mech and is the longest running wolf/prey research except for Isle Royale’s island study. The primary objective of the SNF study is to understand the changes in the wolf and deer populations, how changes in each population affect the other, and how other conditions such as weather affect both. The project’s main means of investigation involves capturing wolves and deer and radio collaring them in a 2,060km² area. During each summer and fall, wolves in 10-14 packs are radio collared, and deer are radio-collared during winter. Radioed wolf packs are observed and counted in winter. In recent years, the project has also trialed noninvasive methods (genetic analyses from scat, camera trapping, snow tracking, citizen science reports) to determine the winter wolf count as well.