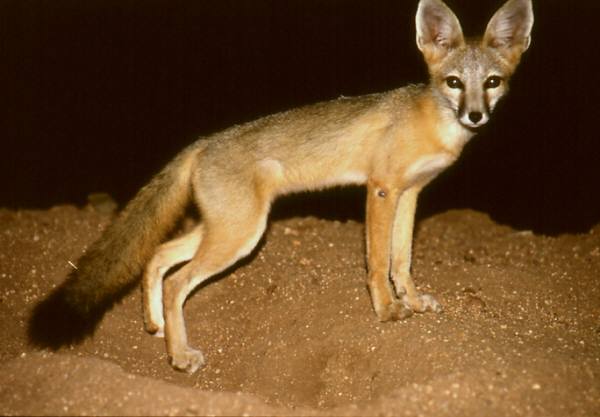 Island, Kit & Swift Fox Working Group - Brian Cypher and Tim Coonan are the coordinators of the Island, Kit & Swift Fox Working Group. The working group report that for both kit foxes and swift foxes, habitat continues to be lost and remaining habitat is increasing subject to degradation, fragmentation, and incompatible uses. The future prognosis for island foxes is however significantly improved. After 4 of 6 subspecies suffered catastrophic declines due to novel predators and disease, mitigation measures have been immensely successful and these 4 populations have returned to or are approaching pre-decline levels. This page highlights some of the recent issues and current conservation needs for these species.

Subspecific designations for Kit Foxes are not fully resolved. As many as eight subspecies have been recognized (McGrew 1979), although analyses by Dragoo et al. (1990) did not find support for any subspecific differentiation. However, although more subspecific clarification clearly is needed, most available data suggest that Kit Foxes in the San Joaquin Valley of California likely warrant subspecific designation, V. m. mutica, due to geographic isolation, and that all other Kit Foxes might be included within a second subspecies, V. m. macrotis (Waithman and Roest 1977, Mercure et al. 1993).

The Kit Fox inhabits the deserts and arid lands of western North America. Generally, the species is common to rare, with population densities fluctuating with annual environmental conditions. Estimation of a population size or even population trends for this species is not possible with currently available information. Population monitoring for this species is largely limited to only a few specific sites. However, natural habitats occupied by the Kit Fox are being transformed (e.g., agriculture, solar energy). Thus, in numerous locations throughout the range, it is safe to assume that, overall, populations and area of occupancy are declining. Nonetheless, the species currently does not meet any of the thresholds for the threatened categories, and is presently assessed as Least Concern. However, this status could change over the next several decades if current habitat loss trends continue.

The Kit Fox inhabits the deserts and arid lands of western North America. In the United States, it occurs from southern California to western Colorado and western Texas, north into southern Oregon and Idaho. In Mexico, it occurs across the Baja California Peninsula and across northern Sonora and Chihuahua to western Nuevo León, and south into northern Zacatecas (McGrew 1979, Hall 1981). 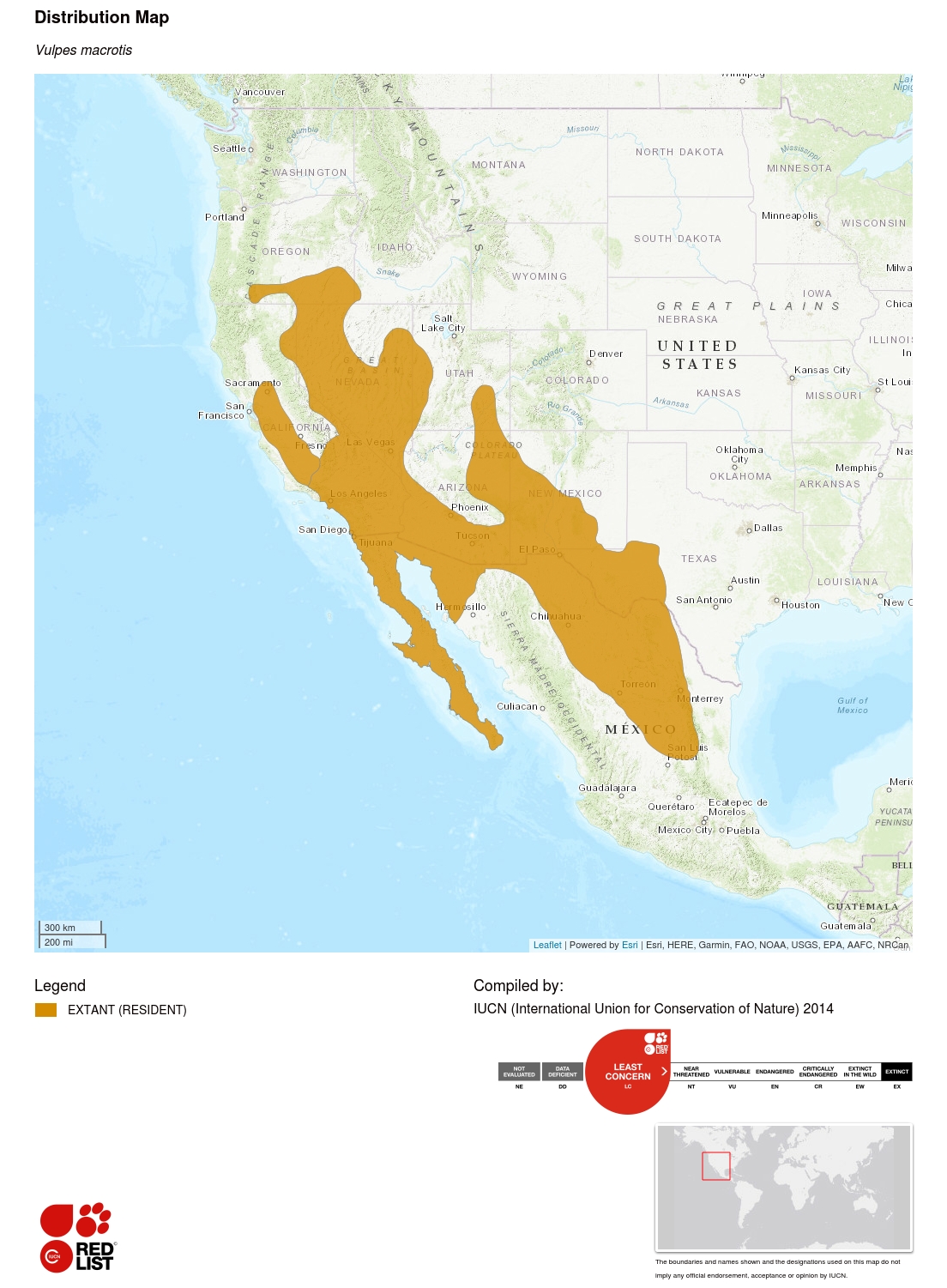 In Mexico, data on which to base a population estimate for Kit Foxes are only available from two localities with very specific characteristics (presence of prairie dog towns). Therefore, the estimation of a population size for the country or even population trends is not possible with current information. However, because natural habitats occupied by the Kit Fox are being transformed, it is safe to assume that, overall, populations of the Kit Fox in Mexico are declining. In the past 10 years, about 40% of prairie dog towns in Coahuila and Nuevo Leon were converted to agriculture (L. Scott and E. Estrada unpubl.), and of the area occupied in Chihuahua by prairie dogs in 1988, 76% remained in 2005 (Ávila et al. 2012) and by 2013 only 3% remained  (R. Sierra and E. Ponce pers. comm.).

In the United States, Kit Fox abundance is unknown. Populations are relatively large and trends are assumed to be relatively stable in Arizona, Nevada, New Mexico, Texas, Utah, and possibly the Mjoave Desert of California, based on extensive remaining suitable habitat. Populations in Colorado, Idaho, and Oregon are relatively small and trends are unknown (Cypher 2003). Populations of the Endangered (USFWS) San Joaquin Kit Fox in the San Joaquin Valley of California are likely still declining due to continuing habitat loss, fragmentation, and degradation (USFWS 1998).

Kit Foxes experience intense interference and exploitative competition from other species, particularly coyotes (White et al. 1995, Cypher and Spencer 1998, Kozlowski et al. 2008). Other competitors include bobcats, badgers, golden eagles, and red foxes. Predators generally are the primary source of mortality, but other causes include vehicles, harvest, and rodenticides (Ralls and White 1995; Cypher et al. 2000, 2014). Disease does not appear to be a significant factor in most Kit Fox populations. At one site, annual survival probabilities for adults ranged from 0.20 to 0.81 over 16 years with a mean of 0.44 (Cypher et al. 2000).

The main threat to the long-term survival of the Kit Fox is habitat conversion, mainly to agriculture but also to urban and industrial development. In both western and eastern Mexico, prairie dog towns, which support important populations of Kit Foxes are being converted to agricultural fields (e.g., Ávila-Flores et al. 2012), and in eastern Mexico the road network is expanding, producing a concomitant increase in the risk of vehicle mortality. In the San Joaquin Valley of California, habitat conversion for agriculture is slowing, but habitat loss, fragmentation, and degradation associated with industrial and urban development are still occurring at a rapid pace. More recently, expansive industrial-scale solar energy generating facilities are being constructed throughout the western USA, but particularly in California, Arizona, and Nevada.

In Mexico, Kit Foxes are occasionally sold illegally on the pet market. Kit Foxes are harvested for fur in some states in the USA (e.g., Arizona, Nevada, New Mexico, Texas and Utah), but otherwise are not used commercially.

Not listed on the CITES Appendices. The Kit Fox is considered Vulnerable in Mexico (SEMARNAT 2010). In the United States, the San Joaquin Kit Fox (V. m. mutica) is federally classified as Endangered, and as Threatened by the state of California (USFWS 1998). In Oregon, Kit Foxes are classified as Threatened. In Colorado, Kit Foxes are classified as Endangered. In Idaho, Kit Foxes are considered a protected non-game species. Harvests are not permitted in Idaho, Oregon, or California, and the Kit Fox is a protected furbearer species (i.e., regulated harvests) in Utah, Arizona, Nevada, New Mexico and Texas. In Mexico, the vulnerable status of the Kit Fox grants conservation measures for the species, but these are not enforced. In the United States, state and federal protections for Kit Foxes are being enforced.
In Mexico, Kit Foxes are found in the Biosphere Reserves of El Vizcaino, Mapimi, El Pinacate and Janos, in the Area of Special Protection of Cuatro Ciénegas, and are probably found in another eight protected areas throughout their range. In the United States, they occur in numerous protected areas throughout their range. The Endangered subspecies V. m. mutica occurs in the Carrizo Plain National Monument and various other federal, state, and private conservation lands.

Efforts are underway to protect the prairie dog towns of both eastern (Pronatura Noreste) and western Mexico (Institute of Ecology from the National University of Mexico), which are known to be strongholds for the Kit Fox, but no specific actions focused on the Kit Fox are being undertaken in Mexico. In the United States, a recovery plan has been completed (USFWS 1998) and is being implemented for the San Joaquin Kit Fox. Recovery actions include protection of essential habitat, and demographic and ecological research in both natural and anthropogenically modified landscapes.

No captive breeding efforts are currently being conducted for Kit Foxes. Facilities such as the Arizona-Sonora Desert Museum in Tucson, Arizona, California Living Museum in Bakersfield, California, and several zoos keep live Kit Foxes for display and educational purposes.

Gaps in knowledge
In general, demographic and ecological data are needed throughout the range of the species so that population trends and demographic patterns can be assessed. In Mexico, available information on the Kit Fox is scarce. The most important gaps in our knowledge of the species are the present distribution of the species and population estimates throughout its range. General biological information is needed from more localities in the Mexican range of the Kit Fox. In the United States, information is needed on the effects of solar energy plants, investigating dispersal patterns and corridors, determining metapopulation dynamics and conducting viability analyses, developing conservation strategies in anthropogenically altered landscapes, assessing threats from non-native Red Foxes, and range-wide population monitoring.

Research in progress in Mexico includes investigations of abundance and diet in the Janos Biosphere Reserve as well as relationships between Kit Foxes and sylvatic plague. Research in progress on the endangered San Joaquin Kit Fox include investigations of solar energy development effects, trophic interactions, urban ecology, population genetic structure, ecology in core and satellite population areas, and population effects of sarcoptic mange. Research in progress elsewhere in the USA includes abundance and ecology in Oregon, detection and ecology in Idaho, survey methods in low-density areas, interactions with coyotes near artificial water sources in Utah, effects of off-highway vehicles in Arizona, and distribution and occupancy in New Mexico.