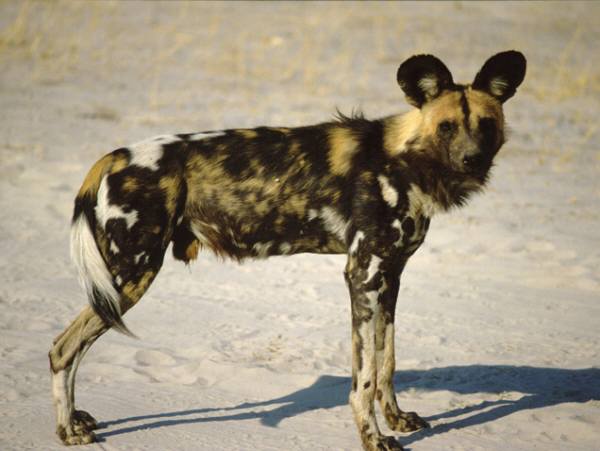 African Wild Dogs have disappeared from much of their former range. The species is virtually eradicated from West Africa, and greatly reduced in central Africa and north-east Africa. The largest populations remain in southern Africa and the southern part of East Africa. Population densities in well-studied areas suggest that between 3,000–5,500 free-ranging wild dogs remain in Africa (< 2,500 of these are mature individuals). Population size is continuing to decline as a result of ongoing conflict with human activities, infectious disease, habitat fragmentation.

African Wild Dogs are rarely seen, even where they are relatively common, and it appears that populations have always existed at very low densities. Ginsberg and Woodroffe (1997) used population densities in well-studied areas to estimate the size of remaining populations. These estimates suggest that between 3,000–5,500 free-ranging wild dogs remain in Africa. Estimated sizes and trends of national wild dog populations in Africa, updated from Woodroffe et al. (1997), can be found in Sillero-Zubiri et al. (2004). 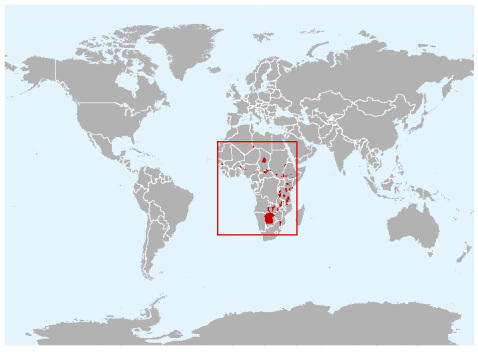 African Wild Dogs are generalist predators, occupying a range of habitats including short-grass plains, semi-desert, bushy savannas and upland forest. While early studies in the Serengeti National Park, Tanzania, led to a belief that wild dogs were primarily an open plains species, more recent data indicate that they reach their highest densities in thicker bush (e.g., Selous Game Reserve, Tanzania; Mana Pools National Park, Zimbabwe; and northern Botswana). Several relict populations occupy dense upland forest (e.g., Harenna Forest, Ethiopia: Malcolm and Sillero-Zubiri 2001; Ngare Ndare Forest, Kenya). African Wild Dogs have been recorded in desert (Lhotse 1946), although they appear unable to establish themselves in the southern Kalahari (M.G.L. Mills, unpubl.), and montane habitats (Thesiger 1970; Malcolm and Sillero-Zubiri 2001), although not in lowland forest. It appears that their current distribution is limited primarily by human activities and the availability of prey, rather than by the loss of a specific habitat type.

African Wild Dogs mostly hunt medium-sized antelope. Whereas they weigh 20–30 kg, their prey average around 50 kg, and may be as large as 200 kg. In most areas their principal prey are Impala (Aepyceros melampus), Greater Kudu (Tragelaphus strepsiceros), Thomson's Gazelle (Gazella thomsonii) and Common Wildebeest (Connochaetes taurinus). They will give chase of larger species, such asCommon Eland (Tragelaphus oryx) and African Buffalo (Syncerus caffer), but rarely kill such prey. Small antelope, such as dik-dik (Madoqua spp.), Steenbok (Raphicerus campestris) and duiker (tribe Cephalophini) are important in some areas, and warthogs (Phacochoerus spp.) are also taken in some populations. Wild dogs also take very small prey such as hares, lizards and even eggs, but these make a very small contribution to their diet.

The principal threats to African Wild Dogs are conflict with human activities and infectious disease. Both of these are mediated by habitat fragmentation, which increases contact between wild dogs, people and domestic dogs. The important role played by human-induced mortality has two long-term implications. First, it makes it likely that, outside protected areas, wild dogs may well be unable to co-exist with the increasing human population unless better protection and local education programmes are implemented. This will be a serious problem for wild dog populations outside protected areas. Second, wild dog ranging behaviour leads to a very substantial "edge effect", even in large reserves. Simple geometry dictates that a reserve of 5,000 km² contains no point more than 40 m from its borders – a distance well within the range of distances travelled by a pack of wild dogs in their usual ranging behaviour. Thus, from a wild dog's perspective, a reserve of this size (fairly large by most standards) would be all edge. As human populations rise around reserve borders, the risks to wild dogs venturing outside are also likely to increase. Under these conditions, only the very largest unfenced reserves will be able to provide any level of protection for wild dogs. In South Africa, proper fencing around quite small reserves has proved effective in keeping dogs confined to the reserve (although fencing has costs, as well as benefits, in conservation terms).

Even in large, well-protected reserves, or in stable populations remaining largely independent of protected areas (as in northern Botswana), wild dogs live at low population densities. Predation by lions, and perhaps competition with hyaenas, contribute to keeping wild dog numbers below the level that their prey base could support. Such low population density brings its own problems. The largest areas contain only relatively small wild dog populations; for example, the Selous Game Reserve, with an area of 43,000 km² (about the size of Switzerland), contains about 800 wild dogs. Most reserves, and probably most wild dog populations, are smaller. For example, the wild dog population in Niokolo-Koba National Park and buffer zones (about 25,000 km², larger than the state of Israel) is likely to be not more than 50–100 dogs. Such small populations are vulnerable to \extinction. "Catastrophic" events such as outbreaks of epidemic disease may drive them to extinction when larger populations have a greater probability of recovery – such an event seems to have led to the extinction of the small wild dog population in the Serengeti ecosystem on the Kenya-Tanzania border. Problems of small population size will be exacerbated if, as seems likely, small populations occur in small reserves or habitat patches. As discussed above, animals inhabiting such areas suffer a strong "edge effect". Thus, small populations might be expected to suffer disproportionately high mortality as a result of their contact with humans and human activity.

There are no commercial uses for wild dogs, other than non-consumptive ecotourism.

Virtually no conservation measures have been implemented specifically for wild dogs. The establishment of very large protected areas (e.g., Selous Game Reserve, Kruger National Park), as well as conservancies on private and communal land, has ensured wild dogs' persistence in parts of eastern and southern Africa, and maintenance of such areas remains the highest priority for wild dog conservation. Attempts are underway to re-establish wild dogs in a network of very small reserves in South Africa, but this approach will demand intensive management in perpetuity and need not, at present, be used as a model for wild dog conservation elsewhere.

Conservation priorities include: (i) to maintain and expand connectivity of habitat available to wild dogs, particularly in northern Botswana/eastern Namibia/western Zimbabwe, South Africa/western Mozambique/south-east Zimbabwe, northern South Africa/south-east Botswana/south-west Zimbabwe and southern Tanzania/northern Mozambique; (ii) to work with local people to reduce deliberate killing of wild dogs in and around these areas, and also in smaller populations in Senegal, Cameroon and Kenya; (iii) to establish effective techniques for protecting small wild dog populations from serious infections such as rabies and distemper; (iv) to carry out surveys to establish the status of other potentially important populations, particularly in Algeria, Angola, Central African Republic, Ethiopia, Mozambique and Sudan, and (v) to continue long-term monitoring of 'sentinel' populations to identify emerging threats. Re-establishment of extinct populations through reintroduction currently has a low priority in most areas, although natural recolonizations should be encouraged.

Occurrence in captivity: There are more than 300 wild dogs in captivity in 55 zoos, as listed on ISIS and as many as 200 additional animals occur in zoos and private collections, particularly in South Africa. Early attempts to reintroduce captive-bred animals to the wild were hampered by the dogs' poor hunting skills and naive attitudes to larger predators. However, recent reintroductions have overcome this problem by mixing captive-bred dogs with wild-caught animals and releasing them together. This approach has been very valuable in re-establishing packs in several fenced reserves in South Africa, but is not considered a priority in other parts of Africa at present. Nevertheless, captive populations have important roles to play in developing conservation strategies for wild populations, through research (e.g., testing of vaccination protocols), outreach and education.

Several pieces of information are needed to enable more effective conservation of African wild dogs. These include: