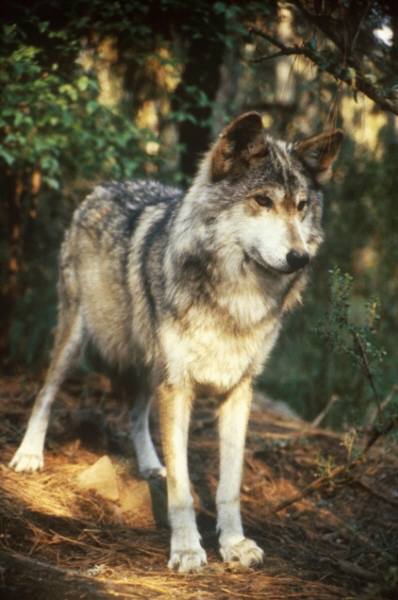 Wolf Working Group - The Wolf working group (formally the Wolf specialist group) is an international organisation of experts on wolves. With wolf conservation matters of internal significance, cooperation across the key geographic areas is paramount. The working group plays a key role in this by allowing for the joint planning of conservation programs, exchange of experiences, research and publications and an assembly of knowledgeable personnel across the globe.

In Asia, two subspecies are recognized: C. l. pallipes (most of the Asian range from Israel to China) and C. l. arabs (Arabian peninsula). Furthermore, wolves of the Himalayan range have been proposed as a distinct subspecies (C. l. chanco).

Note that this assessment follows Jackson et al. (2017) in regarding the Dingo, sometimes considered a subspecies of Grey Wolf (C. l. dingo), as a feral dog population derived from a domesticate, and hence as C. familiaris, along with all other free-ranging dogs.

Originally, the Grey Wolf was the world's most widely distributed mammal. It has become extinct in much of Western Europe, in Mexico and much of the USA, and their present distribution is more restricted; wolves occur primarily but not exclusively in wilderness and remote areas. Their original worldwide range has been reduced by about one-third by deliberate persecution due to depredation on livestock and fear of attacks on humans. Since about 1970, legal protection, land-use changes, rural human population shifts to cities and increasing prey populations have arrested wolf population declines and fostered natural recolonization in parts of its range and reintroduction in three areas of USA. Continued threats include competition with humans for livestock and game species, exaggerated concern by the public regarding the threat and danger of wolves, and fragmentation of habitat, with resulting areas becoming too small for populations with long-term viability.

Although the Grey Wolf still faces some threats, its relatively widespread range and stable population trend mean that the species, at global level, does not meet, or nearly meet, any of the criteria for the threatened categories. The global population is estimated to be in the order of 200-250 thousands individuals. Therefore, it is assessed as Least Concern. However, at regional level, several wolf populations, such as those in Europe, are seriously threatened (http://www.lcie.org).

Originally, the Grey Wolf was the world's most widely distributed mammal, living throughout the northern hemisphere north of 15°N latitude in North America and 12°N in India. It became extinct in much of Western Europe (Boitani 1995), Mexico and much of the USA (Mech 1970) and Japan. Their present distribution is more restricted: wolves occur primarily in wilderness and remote areas, especially in Canada, Alaska and northern USA, Europe, and Asia from about 75°N to 12°N (Mech and Boitani 2004), but they are found also in human-dominated landscapes where there is sufficient prey base and human-caused mortality is low. Distribution is highly dynamic as wolf populations are currently increasing in range and numbers in north-central and western United States and much of Europe. Dispersing individuals can be found in almost any European country except the United Kingdom and Ireland. 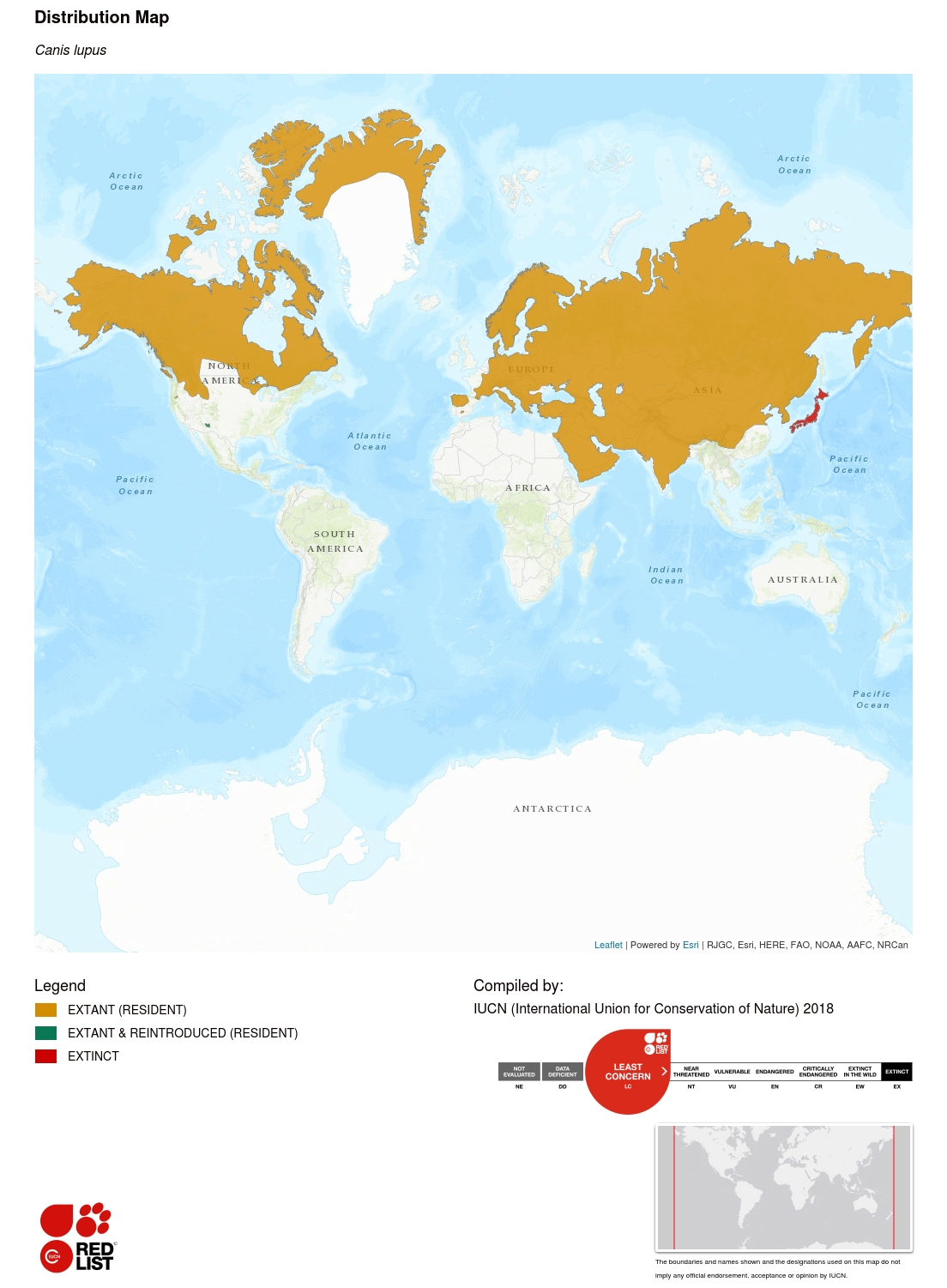 Because of the diversity in climate, topography, vegetation, human settlement and development of wolf range, wolf populations in various parts of the original range vary from extinct to relatively pristine. Wolf densities vary from about one/12 km² to one/120 km².

Mech and Boitani (2004) provide details, for each range country, on subspecies present, population status, approximate numbers, the percentage of former range occupied at present, main prey (where known), legal status, and cause of decline. For Europe, the wolf population is essentially a large meta-population with several distinct subpopulations; the status and trends for each population is provided by the Large Carnivore Initiative for Europe (http://www.lcie.org/) and in Chapron et al. (2014). The status and trends for wolf populations in the United States are provided by the U.S. Fish and Wildlife Service and game agencies in several US states, including Minnesota, Wisconsin, Michigan, Montana, Idaho, Wyoming, Oregon, Washington, Arizona, and New Mexico. In general, population increases in North America and Europe are likely to be off-set by localized declines in other parts of the range.

The historical range of the Grey Wolf has been reduced by about one-third, primarily in developed areas of Europe, Asia, Mexico, and the United States by poisoning and deliberate persecution due to depredation on livestock. Since about 1970, legal protection, land-use changes, and rural human population shifts to cities have arrested wolf population declines and fostered natural recolonization in parts of Western Europe and the United States, and reintroduction in the western United States and Mexico. Continued threats include competition with humans for livestock, especially in developing countries, exaggerated concern by the public concerning the threat and danger of wolves. Fragmentation of habitat, with resulting areas becoming too small for populations with long-term viability can be a threat in parts of the range with highest density of human activities.

There is sustainable utilization of the species' fur in Canada, Alaska, Montana and the former Soviet Union and Mongolia, although illegal hunting for fur does occur in some range states.

Legislation
The species is included in CITES Appendix II, except populations from Bhutan, India, Nepal and Pakistan, which are listed on Appendix I. The species is strictly protected under the Bern Convention (Appendix II) and Habitats Directive (Annex II and IV), and there is extensive legal protection in many European countries; however, there are national exceptions, and enforcement is variable and often non-existent.

Occurrence in captivity
The species lives and breeds well in captivity and is common in many zoological gardens.

Gaps in knowledge
One of the most important questions still remaining about wolves involves the nature of their interaction with prey populations. The conditions under which wolves limit, regulate, or control their population is still open and important (Mech and Boitani 2003). Of recent and increasing importance is clarifying the role that wolves play in precipitating ecosystem effects, particularly trophic cascades (Mech and Boitani 2003, Ripple and Betscha 2004, Peterson et al. 2014). Of more academic interest are questions involving wolf genetics, scent-marking behaviour, pseudo pregnancy and diseases (Mech 1995). Of recent and increasing importance is the issue of hybridization with dogs (and indeed other Canis spp) in several parts of the range in Europe and Asia, with unknown impact on medium- and long-term genetic integrity of the species.