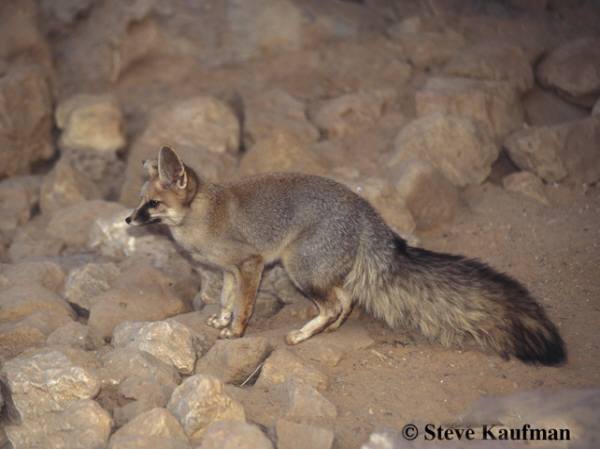 This species is listed as Least Concern as available evidence suggests that Blanford's Fox has a relatively wide distribution albeit largely confined to mountainous regions. It is fairly common in some parts of its range, and while the species may possibly be undergoing some localized declines, there is at present no evidence to suggest any range-wide decline that would meet the thresholds for a threatened category or for Near Threatened.

The Blanford's Fox has a disjunct distribution. Originally known only from southwestern Asia (Novikov 1962, Bobrinskii et al. 1965, Lay 1967, Hassinger 1973, Roberts 1977), in 1981 this species was discovered in Israel (Ilany 1983) and subsequently found to occur more widely in arid mountainous regions in the Arabian Peninsula. Peters and Rödel (1994) reviewed available distribution records of this species and, for the easterly part of the range, provided what they considered to be definite records from around the Iranian Plateau in Iran, Turkmenistan and Pakistan, with more questionable records (usually based on skins obtained from fur bazaars or otherwise indirectly) from Afghanistan and Tajikistan (though there is no obvious reason why they should not occur).

In the Middle East, there are now confirmed records from Jordan, the Sinai Peninsula (Egypt), Oman, Saudi Arabia and the United Arab Emirates (Mendelssohn et al. 1987, Harrison and Bates 1989, Harrison and Bates 1991, Al Khalili 1993, Stuart and Stuart 1995, Amr et al. 1996, Amr 2000, Cunningham and Howarth 2002, Smith et al. 2003, Abu-Baker et al. 2004, Cunningham and Wronski 2009, Mallon and Budd 2011, Eid et al. 2013, Eid et al. 2015). They have long been suspected to occur in Yemen, and were recorded by Al Jumaily et al. (2012) in Hawf Forest in Al Mahra Governorate in extreme eastern Yemen, close to the borders with Oman, at an altitude of about 1,200 m asl. It also seemed likely that they would be shown to occur in western Yemen where contiguous with mountains in southwest Arabia (Mallon and Budd 2011), and a camera-trapping record by Mohammed Al-Qudamy in February 2014 in Wadi Sharis (Wadi Sharas) in Hajjah Governorate, NW of Sana'a, now confirms their occurrence (D. Mallon pers. comm. 2015). There is a single record from Egypt, west of the Suez Canal, in Wadi Qiseib from an animal collected in 1988, and originally thought to be Vulpes rueppellii (Peters and Rödel 1994, Geffen and Peters 2013). There are no confirmed records from Syria, though they might possibly occur (Masseti 2009). 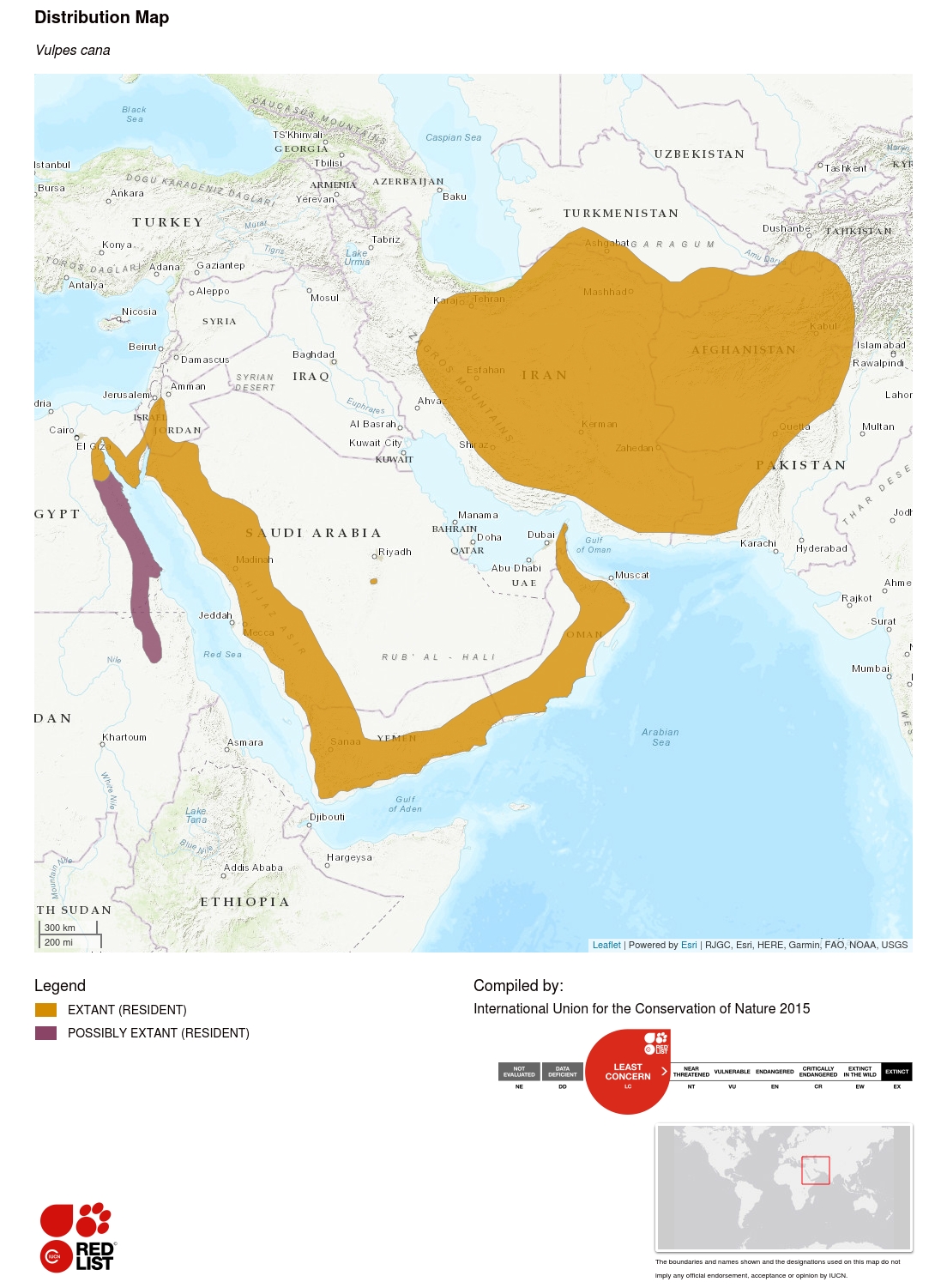 The only available population densities come from Israel and Jordan. In Israel, where the species is fairly common in the south-east, density estimates of 2.0/km2 in Ein Gedi and 0.5/km2 in Eilat have been recorded (Geffen 1994). In Jordan, density using the Bondrup-Nielsen formula identified 8.5 individuals per km2 (Eid et al. 2013). Surveys in other regions indicate that Blanford's Fox is locally abundant. In United Arab Emirates, for example, researchers frequently captured foxes in the northeastern mountains of the country (Smith et al. 2003).

Blanford's Fox generally occurs in mountainous regions. Hassinger (1973) concluded that Blanford's Foxes are usually found below an altitude of 2,000 m asl in dry montane biotopes, (although see Peters and Rödel 1994). All the records collected on the Iranian Plateau are from foothills and mountains in the vicinity of lower plains and basins (Hassinger 1973, Roberts 1977). In that region, the habitat of the Blanford's Fox comprises the slopes of rocky mountains with stony plains and patches of cultivation (Lay 1967, Roberts 1977) and they appear to avoid higher mountain ranges as well as lower, warmer valleys (Roberts 1977). In the Middle East, Blanford's Foxes are confined to mountainous desert ranges and inhabit steep, rocky slopes, canyons and cliffs (Mendelssohn et al. 1987, Harrison and Bates 1991); their distribution is apparently not limited by access to water (Geffen et al. 1992a). In Israel, Blanford's Foxes inhabit the driest and hottest regions, being distributed along the western side of the Rift Valley, and, in the central Negev, where specimens were collected in creeks that drain into the Rift Valley (Geffen et al. 1993). The densest population is found in the Judaean Desert at elevations of 100–350 m below sea level, in contrast to Roberts' (1977) remark that the species avoids low, warm valleys in Pakistan.

There are currently no obvious major threats resulting in range-wide declines of Blanford's Fox. However, general habitat loss, due mainly to expanding settlement and tourism development, and human persecution and indirect mortality, do pose localized threats (Abu-Baker et al. 2004, Mallon and Budd 2011). In Israel, habitat loss is limited as most of the area where this species occurs is designated as protected. However, political developments may change the status of the northern Judaean Desert, and human development along the Dead Sea coasts may also pose a considerable threat to existing habitat. Similar concerns exist for the populations in the U.A.E. (Smith et al. 2003). Indirect mortality is usually a result of animals being killed incidentally through carcass poisoning of other target species, such as hyaenas and wolves. The current situation in Iran and Pakistan is unknown.

At present, the trade in fur is negligible. There is some suggested use of fox meat as medicine, and body parts, especially tails, by Bedouins (Eid et al. 2015).

Legislation
This species is listed on CITES – Appendix II. It is fully protected in Israel, with no hunting, trapping or trading permitted. Holding in captivity requires a special permit from the Nature Reserves Authority of Israel. There is a ban on hunting in Jordan and Oman. However, there is no legal protection in Egypt, Saudi Arabia, U.A.E., Iran, Afghanistan or Pakistan.

Presence in captivity
In Israel, the species is kept in captivity at the Hai Bar Breeding Centre (near Eilat). In previous years, there was a pair at the Tel Aviv University Zoo. Captive individuals are also kept at the Breeding Centre for Endangered Arabian Wildlife, Sharjah, U.A.E. Foxes have been successfully bred at all the above facilities.

Research needs
The information on the biology of Blanford's Foxes is mostly from the southern part of Israel. Little is known on the behaviour and ecology of the species in the eastern part of its distribution. Further information on the distribution of the species in Egypt would also be useful. Interactions with other predators (including potential competition with Red Fox Vulpes vulpes) and the susceptibility to diseases are poorly understood.