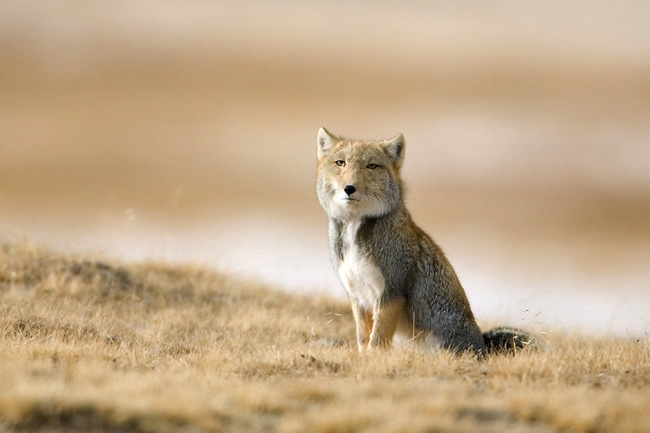 The Tibetan Fox is widespread in the steppes and semi-deserts of the Tibetan Plateau, and is also present in Nepal, in the Mustang Region, and in Ladakh. There are no major threats to the species at present, although poisoning of pikas (a major prey item) in much of the Tibetan plateau poses a concern. Nonetheless, there is no evidence that the species is currently undergoing a decline that would warrant listing in a threatened category.

Widespread in the steppes and semi-deserts of the Tibetan Plateau from the Ladakh area of India, east across China including parts of the Xinjiang, Gansu, Qinghai, and Sichuan provinces and all of the Tibet Autonomous Region, and into Yunnan (Gong and Hu 2003, Wang 2003, Namgail and Bagchi 2005, Clark et al. 2008, Wozencraft 2008, Jnawali et al. 2011). Also present in Nepal north of the Himalaya, known specifically from the Mustang area (Schaller and Ginsberg 2004). There are no confirmed records for Bhutan. 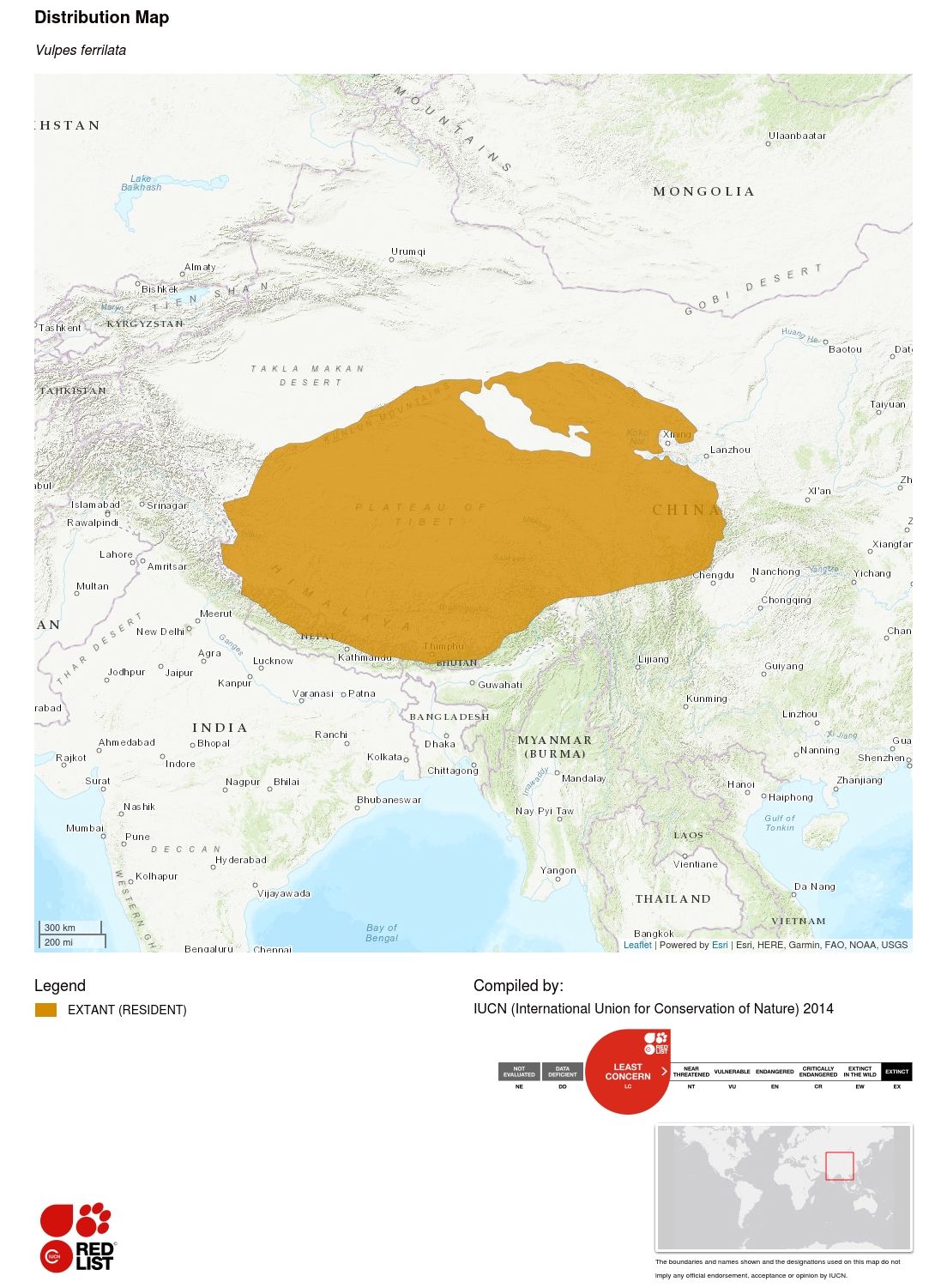 In general, Tibetan Fox occur at low densities. Fox abundance depends partly on prey availability and partly on human hunting pressure. In northwest Tibet, in a remote region of desert steppe with little prey, only five foxes were seen in 1,848 km of driving. In southwest Qinghai in a benign environment with much prey, 15 foxes were tallied in 367 km (Schaller 1998). In Serxu county, northwest Sichuan Province, an area with abundant with Black-lipped Pika (Ochotona curzoniae), eight Tibetan Foxes were sighted along 11 km of country road during a night count in 2001 (Anonymous 2000), and 27 sightings (at least 12 individuals) were recorded along line transects in the same area in August 2003 (Wang Xiaoming and Wang Zhenghuan pers. obs.). More recent studies with marked animals (Liu et al. 2007) have suggested that Tibetan Foxes can achieve relatively high densities where preferred prey is abundant and human hunting pressure low. Densities of 2-4/km² may occur. A very coarse and unreliable estimation of population density of Tibetan Foxes in the Tibetan Autonomous Region was provided by Piao (1989), which extrapolated to an estimate of 37,000.

The species is found in upland plains and hills from about 2,500–5,200 m (Clark et al. 2008); however, the preponderance of Tibetan Fox habitat is >3,000 m, and the majority of that > 4,000 m. Most of its habitat consists of sparse grasslands devoid of trees and shrubs (Wang et al. 2007; although see also Gong and Hu 2003), particularly where Black-lipped Pikas are abundant. It appears that Tibetan Foxes are closely tied to the presence of pikas, and may in fact be an obligate predator (Harris et al. in press). Tibetan Foxes appear particularly adept at capturing pikas (including, at times, following brown bears Ursus arctos excavating pika burrows in order to capture pikas that escape; Harris et al. 2008), and are rarely encountered where pikas are absent. They also feed on carrion, and other small mammals (Zheng 1985). Tibetan Foxes spend considerable time resting in small burrows, hollows and rock crevasses (Wang et al. 2003). They are most active at dawn and dusk, although can be seen at any time of the day (Wang et al. 2004).

There are no major threats to the species at present. Ongoing government-sponsored programmes involving poisoning of pikas, the main prey, takes place across much of the Tibetan plateau and poses the main threat; secondary poisoning of Tibetan Foxes may occur, although does not appear to be common. However, reductions or complete elimination of their major prey would certainly be damaging to Tibetan Fox populations. If such pika reduction programmes continue or increase, the status of the Tibetan Fox would require reassessment. Domestic dogs can kill Tibetan Foxes, and may be a major source of mortality in some areas (Wang et al. 2007).

Hunting and snaring occurs for the pelt (which is used to make hats), but is not common because the coarse pelts of Tibetan Foxes are of minor value.

Not listed on the CITES Appendices.
The species is legally protected in several large Chinese reserves, including Arjin Shan (45,000 km²), Xianza (40,000 km²), Chang Tang (ca. 334,000 km²), Kekexili (ca. 45,000 km²), and Sanjiangyuan (ca. 152,000 km²) (Schaller and Ginsberg 2004). However, actual protection remains minimal. Likely to occur in other protected areas throughout the species' range. The species is not known to be held in any formal conservation breeding programme, although some animals may be held in a few zoos.

Despite recent studies that have helped further understanding of the species' biology, very little remains known of their natural history.