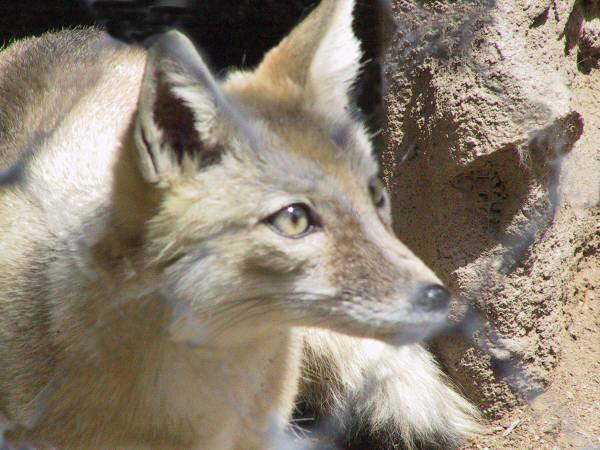 Corsac Foxes occur throughout the arid steppes of northern and central Asia. Although several studies have revealed information about the species’ behaviour and ecology, little information exists on the status of populations in most parts of the species’ range. Threats in recent years have also increased and resulted in declining trends in some regions. The species is not considered threatened at present, but the impacts of increasing harvest levels, illegal trade, and landscape development should be monitored.

Corsac distribution extends across much of Eurasia. One part covers the Middle Asian republics of Turkmenistan, Uzbekistan, Tajikistan and Kazakhstan, as well as steppe and forest-steppe areas of Russia, including the southern region of Western Siberia. In Europe its range reaches the Samara Region, Tatarstan to the North and northern Caucasia to the South. The second, much smaller area lies in southern Transbaikalia representing the northern periphery of the Mongolian and Manchurian section of the species' distribution. Outside Russia the species' range includes the steppe part of north-eastern China, including Manchuria, Inner Mongolia, and the region between Argun and Big Khingan, most of Mongolia except for its forested and mountain regions, Dgungaria, Kashgaria, Afghanistan (probably only northern) and north-eastern Iran. The southern limit of distribution is unknown, but it probably reaches to the mountain ridges separating the Tibetan Highlands from the north. Thus, the two ranges (western and eastern) are connected by a relatively narrow neck in the Dgungar Gate and Zaisan Basin region. In recent years, a westward area expansion has been recorded, particularly into the Voronezh region following active recovery of Baibak (Marmota bobak) populations. Occasionally, the species is recorded from the Ukrainian steppe (as far as Pavlodar to the West), eastern Transcaucasia (Azerbaijan) and, probably, western Kyrgyzstan.

In Russia the Corsac is rare in most regions, but common in western Siberia and Transbaikalia. It sometimes occurs in northern parts of western Siberia's forested steppes, but in low numbers. The species is common everywhere between the Volga and Ural rivers. In Turkmenistan, Kazakhstan, Mongolia and northern China, the Corsac is common or abundant, although in Tajikistan and Uzbekistan the species is usually rare. Population status in Afghanistan and Iran is unknown. 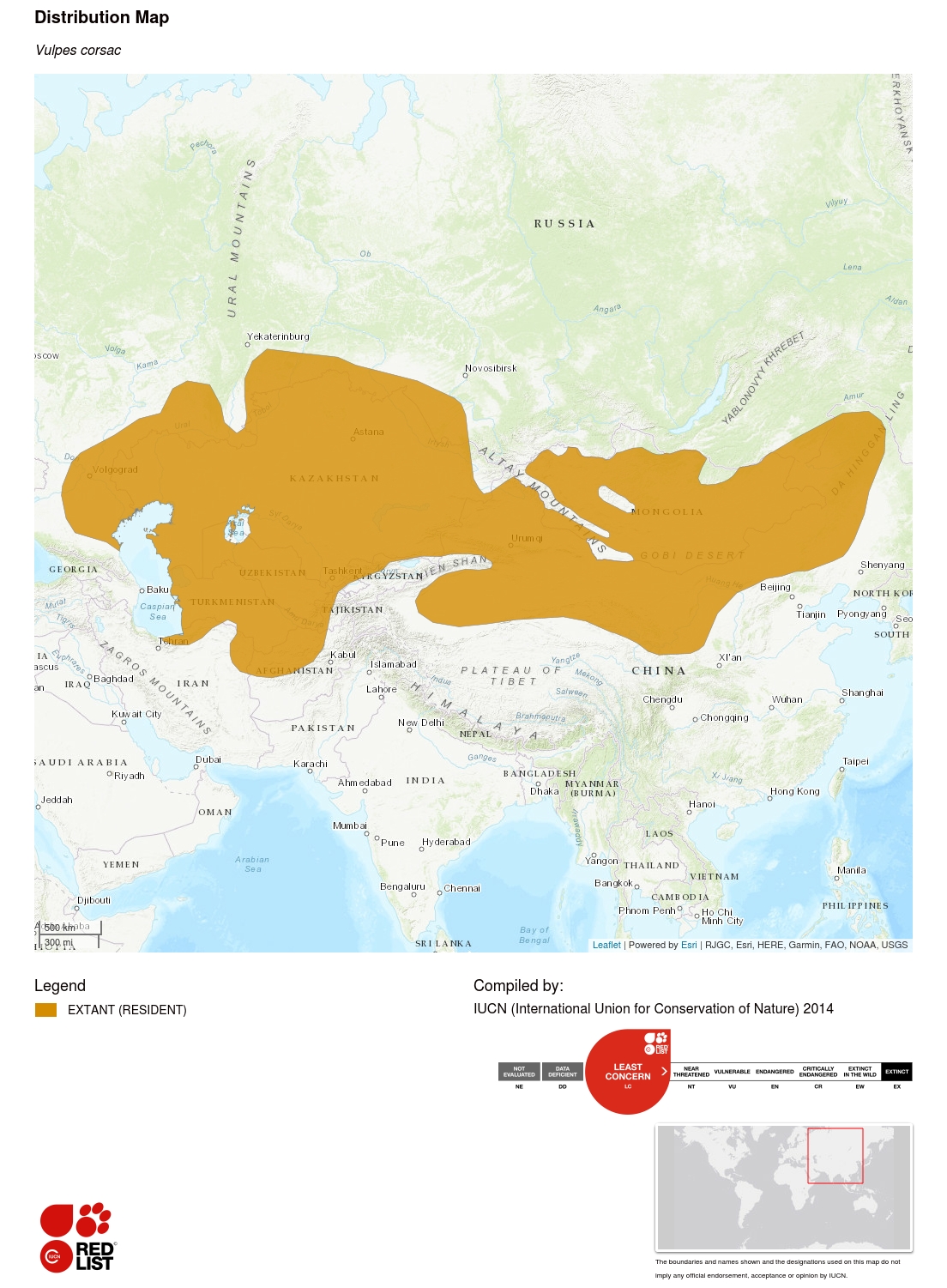 The Corsac Fox is generally a widespread and common species.  However, there are no range-wide estimates of population size and few details are known about the characteristics of regional populations. Most information on population trends is based on harvest numbers and observations. Some accounts suggest that Corsac populations fluctuate greatly over short periods of time, often in response to climatic events (e.g., cold winters with high snowfall). One report indicated that numbers can drop tenfold within the space of a single year. By comparison, in favourable years, numbers can increase by the same margin, but more within a three- to four-year period. Population changes have also driven by intensive harvesting for furs. Harvest levels have varied by country and probably reflect population trends.

The Corsac typically inhabits grassland steppes, semi-deserts and deserts, avoiding mountains, forested areas and dense vegetation. In the western part of the range, Corsacs occur in low-grass steppe, avoiding dense and tall grass steppes. In Kaspyi Sea region the steppes and tarragon-cereal semi-deserts are favoured. It also occurs in fixed-sand habitats (Nogaiskaya Steppe). In the Volgo-Ural watershed the Corsac inhabits most usual habitats, but prefers semi-deserts. To the east of the Ural Mountains, the species inhabits steppes and in favourable years occurs even in forested steppes. In Mongolia and Kazakhstan typical habitats are low grass steppes and semi-deserts, often inhabiting low hills, but avoiding low mountains. In Middle-Asia it inhabits semi-deserts and ephemeral-deserts, avoiding drifting sands. One limiting factor is snow height in winter, and this species has been reported to avoid areas where the depth of snow exceeds 150 mm, preferring areas where the snow is either shallower or highly compressed.

Corsacs occupy home ranges that vary depending on landscape conditions. In Mongolia, home ranges averaged 6.5 km2 and ranged from 2.2 to 9.7 km2 seasonally among a radio-collared population. Home ranges elsewhere have been reported to vary from as small as 1 km2 to as large as 35-40 km2 (based on anecdotal reports and observations). Home ranges typically include a mix of steppe, semi-desert, and desert habitats.

Corsacs are mainly nocturnal, but have been observed to be active during twilight and daytime hours. They typically spend daytime hours in a subterranean burrow or den, which presumably provides shelter from weather conditions (e.g, heat, aridity). Home ranges may have several actively used burrows, which may also provide temporary refuges from predators or competitors. About 64% of burrows used in Mongolia were those of Siberian marmots (Marmota sibirica). Marmots live in colonies that may include >90 burrows spread over several hectares. Marmots have declined substantially due to overharvesting. The decline of marmots may be linked to population declines of Corsacs in some areas.

The primary threat to Corsac Foxes is over-harvesting. Throughout most of their range, Corsacs are hunted intensively for their pelts. Hunting has been a traditional (and commercial) activity in most range countries and harvest numbers have historically been large. For example, up to 50,000 foxes were harvested in Russia in some years during the 20th century (one record even indicated 135,700 skins were tanned in 1923/24) (Heptner and Naumov 1998). Similarly, in Mongolia, an estimated 1.1 million furs were sold to the Soviet Union from 1932 to 1972 with a peak trade of 62,926 in 1947 (Wingard and Zahler 2006). Over-harvesting resulted in hunting bans in both countries at times to allow populations to recover following periods of intensive hunting. Since the collapse of the Soviet Union, societal change has resulted in few regulations on hunting in several range countries, which has been exacerbated by growing commercial markets for fur. As a result, over-harvesting and illegal trade in international markets has been a growing concern for the species.

Other threats include overgrazing by livestock and landscape development (e.g., roads, houses, mining), which may reduce habitat quality for the species. The decline of marmots may also impact the species in some areas, as Corsacs often use marmot burrows as daytime resting locations. Further studies on the impacts of land use/development and interactions with other species are needed.

Corsacs are hunted intensively for their pelts. Hunting has been a traditional (and commercial) activity in most range countries and harvest numbers have historically been large. For example, up to 50,000 foxes were harvested in Russia in some years during the 20th century (one record even indicated 135,700 skins were tanned in 1923/24) (Heptner and Naumov 1998). Similarly, in Mongolia, an estimated 1.1 million furs were sold to the Soviet Union from 1932 to 1972 with a peak trade of 62,926 in 1947 (Wingard and Zahler 2006).

Not listed on CITES Appendices. Hunting of Corsac Foxes is regulated by special national legislation, in which the species is considered a fur-bearer species (Russia, Kazakhstan, Turkmenistan, Uzbekistan, Mongolia). Trapping/hunting is allowed only from November through March in Russia, Kazakhstan, and Turkmenistan. Certain methods of hunting are prohibited, such as digging or smoking animals out of dens, den flooding, and poisoning.

Corsac Foxes are protected in strict nature reserves (the highest protection status for the territory) and in national parks in China, Russia, Turkmenistan, Uzbekistan and Mongolia.

No special conservation programmes have been carried out.

Corsac Foxes breed well in captivity, although few individuals exist in zoos. In the Moscow Zoo, during the 1960s, one pair of Corsacs produced six litters during the time that they remained together.

There are several aspects of this species' biology that require investigation, including social organization and behaviour, distribution and population status in different regions, interactions with other species (e.g., marmots), and the impacts of hunting/trapping and landscape development.