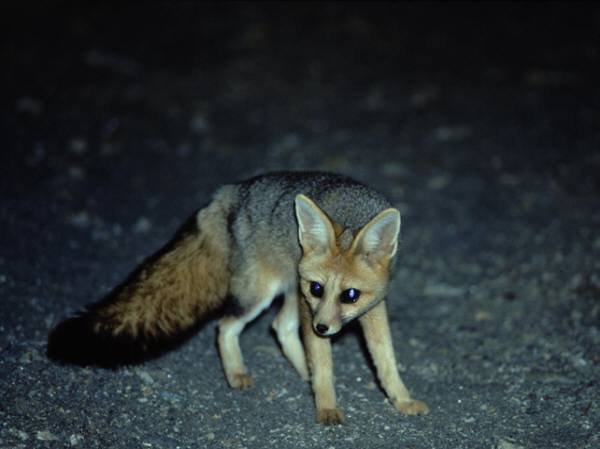 The Cape Fox is widespread in the central and western regions of southern Africa, and has even expanded its range over recent decades. It is generally common to fairly abundant across much of its range, although problem animal control activities have resulted in population reductions in some areas. It is thought that populations are currently stable across their entire range and there is no reason to believe that the species meets any criteria for listing in a threatened category.

The species is widespread in the central and western regions of southern Africa, reaching to about 15°N in south-western Angola (Crawford-Cabral 1989). It occupies mainly arid and semi-arid areas, but in parts, such as the fynbos biome of South Africa's western Cape Province, the species enters areas receiving higher precipitation and denser vegetation. The species has expanded its range over recent decades to the south-west where it reaches the Atlantic and Indian Ocean coastlines (Stuart 1981). Expansion through South Africa's eastern Cape Province has been documented (Coetzee 1979). Status in Swaziland is uncertain, but they may occur in the south-west (Monadjem 1998), as the species occurs in adjacent regions of north-western KwaZulu-Natal (Rowe-Rowe 1992); they are not confirmed from Lesotho, but may occur (Lynch 1994). Previous records of its occurrence in western Zimbabwe (Roberts 1951, Coetzee 1977) and Mozambique (Travassos Dias 1968) have not been substantiated, and it is considered unlikely that these records are valid. 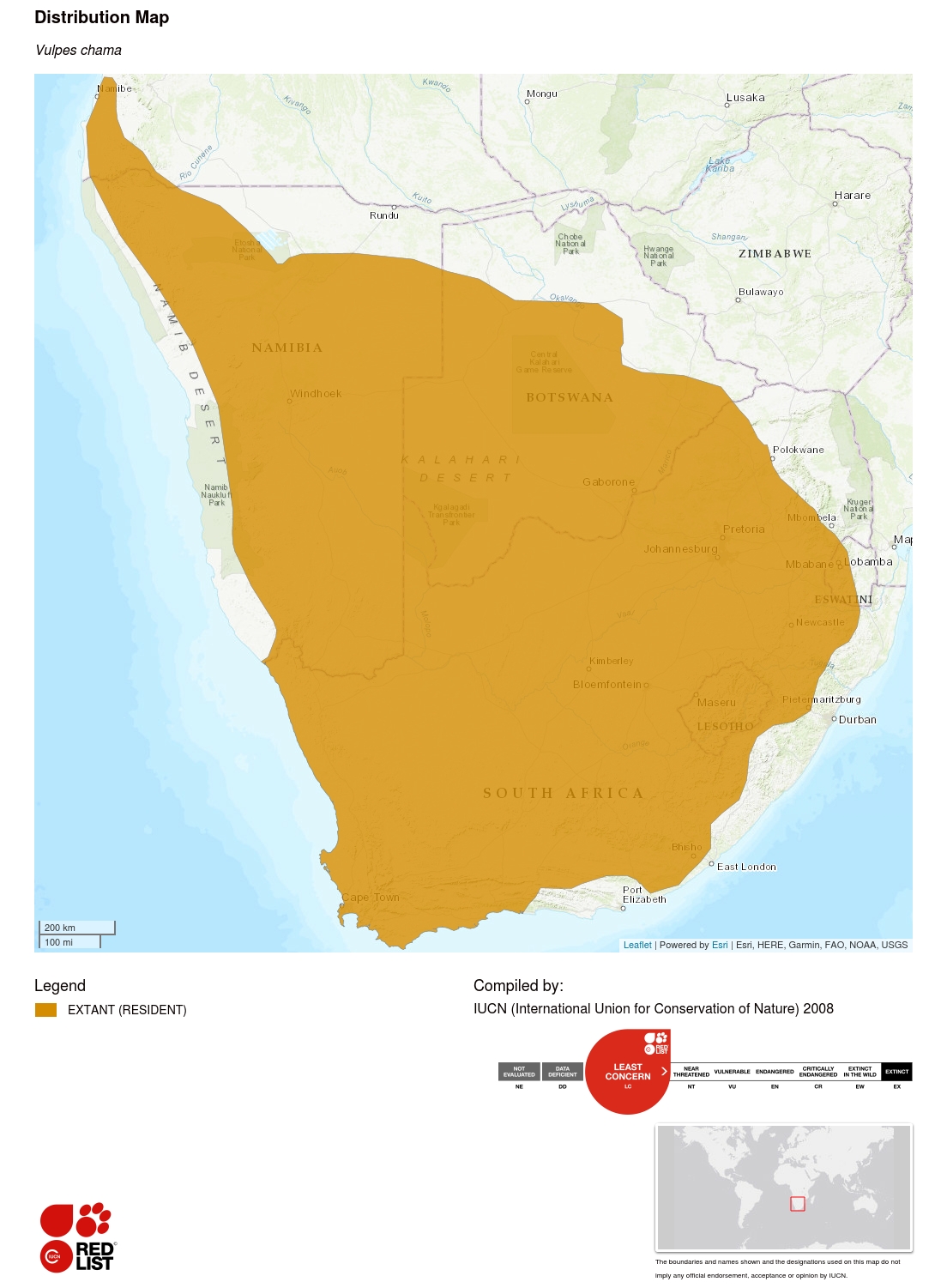 Generally common to fairly abundant across much of its range, although problem animal control activities have resulted in population reductions in some areas. Estimates are only available for South Africa's Free State province where an average density of 0.3 foxes per km² was estimated with a total population of 31,000 individuals (Bester 1982). Annual offtake resulting from problem animal control programmes averaged roughly 16% up to 1985, with no obvious declines in overall populations (Bester 1982). Range and numbers have increased in the south-west and east of South Africa (Coetzee 1979, Stuart 1981). Estimated population sizes or numbers are not available, but it is thought that populations are currently stable across their entire range.

They mainly associate with open country, including grassland, grassland with scattered thickets, and lightly wooded areas, particularly in the dry Karoo regions, the Kalahari and the fringes of the Namib Desert. They also penetrate moderately dense vegetation in lowland fynbos in the western Cape, as well as extensive agricultural lands where they lie up in surviving pockets of natural vegetation during the day and forage on arable and cultivated fields at night (Stuart 1981). Along the eastern flank of the Namib Desert, Namibia, they occupy rock outcroppings and inselbergs, ranging out onto bare gravel plains at night (Stuart 1975). In Botswana, they have been recorded from Acacia-scrubland, short grassland and especially on the fringes of shallow seasonal pans, as well as cleared and overgrazed areas (Smithers 1971). In the central Karoo of South Africa, they occupy the plains as well as the low rocky ridges and isolated rock outcroppings. In the Free State, Lynch (1975) found that they were most abundant in areas receiving less than 500 mm of rainfall, although in KwaZulu-Natal they have been recorded between 1,000 and 1,500 m above sea level, where rainfall is roughly 720–760 mm (Rowe-Rowe 1992).

There are no major threats to the species. Habitat loss/changes are not a major factor influencing the conservation status of the Cape Fox. In fact, in western Cape Province and elsewhere, changing agricultural practices have resulted in range extensions for this species, as well as for the Bat-eared Fox (Stuart 1981). Expansion of semi-arid karroid vegetation during the process of desertification, especially eastwards, has also resulted in range extensions of this canid. Heavy direct and indirect problem animal control measures do not seem to have had a major impact on populations of the Cape Fox, even though they have resulted in declines in some areas. The illegal but widespread and indiscriminate use of agricultural poisons on commercial farms poses the main threat (Stuart and Stuart 2013).

The trade in Cape Fox pelts is negligible and this situation is unlikely to change.

Not listed in the CITES Appendices. Occurs in many protected areas across its range, including a number of provincial and private nature reserves, as well as on game ranches in all South African provinces, although the species has a much more restricted range in Limpopo Province and KwaZulu-Natal (Stuart 1981, Rautenbach 1982, Lynch 1975, Rowe-Rowe 1992). In Swaziland, the species may occur in Nhlangano Nature Reserve in the south-west and pups have been successfully reared in Milwane Game Reserve (Monadjem 1998).

Although treated as a problem animal across most of its range, it is partially protected in several South African provinces, as it does not appear on the official lists of problem species. However, no permit is required from any authority to kill this fox in problem animal control operations. No protection measures are currently enforced and at the present time, this is not necessary.

Although the Cape Fox has been extensively studied in South Africa's Free State province (Lynch 1975, Bester 1982, Kok 1996), there is little information available elsewhere within its range. Aspects such as diet and reproduction are quite well known, but little information is available on aspects of social ecology and behaviour in the wild. Some investigation into the role, if any, this species plays in disease transmission is necessary.