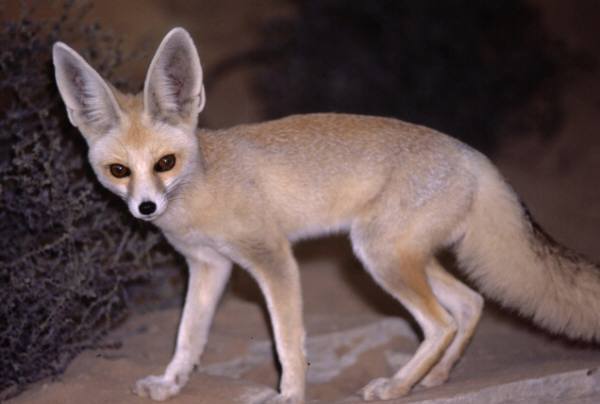 This species is listed as Least Concern as, although there is no detailed information on its abundance, the species is widespread in desert and semi-desert regions of North Africa and across the Arabian Peninsula eastwards to Pakistan. Despite increasing pressure of urban development in some parts of its range, at present there are still plenty of arid, undeveloped areas remaining and there are otherwise no known major range-wide threats believed to be resulting in a population decline that would warrant listing in a threatened category.

This species is widespread in desert and semi-desert regions of North Africa (north of 17°N) from Morocco and Mauritania to Egypt and Somalia, in the mountains and fringes of the Sahara Desert (Cuzin and Lenain 2004, Cuzin 2013), including the Ahaggar mountains of Algeria, the Air Massif in Niger and regularly on the deposits created at the former lake margins of Greater Lake Chad in central Chad (T. Wacher pers. obs.). The only country for which there does not seem to be a definite published record is Mali, but it is very likely that they do occur. It is also thinly distributed across the Arabian Peninsula, being recorded from Oman, Saudi Arabia, United Arab Emirates and Yemen (Mallon and Budd 2011). They range northwest to Israel and Jordan and then eastwards to Pakistan (68°E; Cuzin and Lenain 2004). A record for Syria is the first confirmation of their presence in this country (Serra et al. 2007). Suspected historical expansion of distribution area is likely due to desertification, compensated by competition with the Red Fox due to new human settlements. It seems to avoid the extreme arid regions in the middle of the Sahara, being more abundant on the fringes, in mountain massifs and near oases. 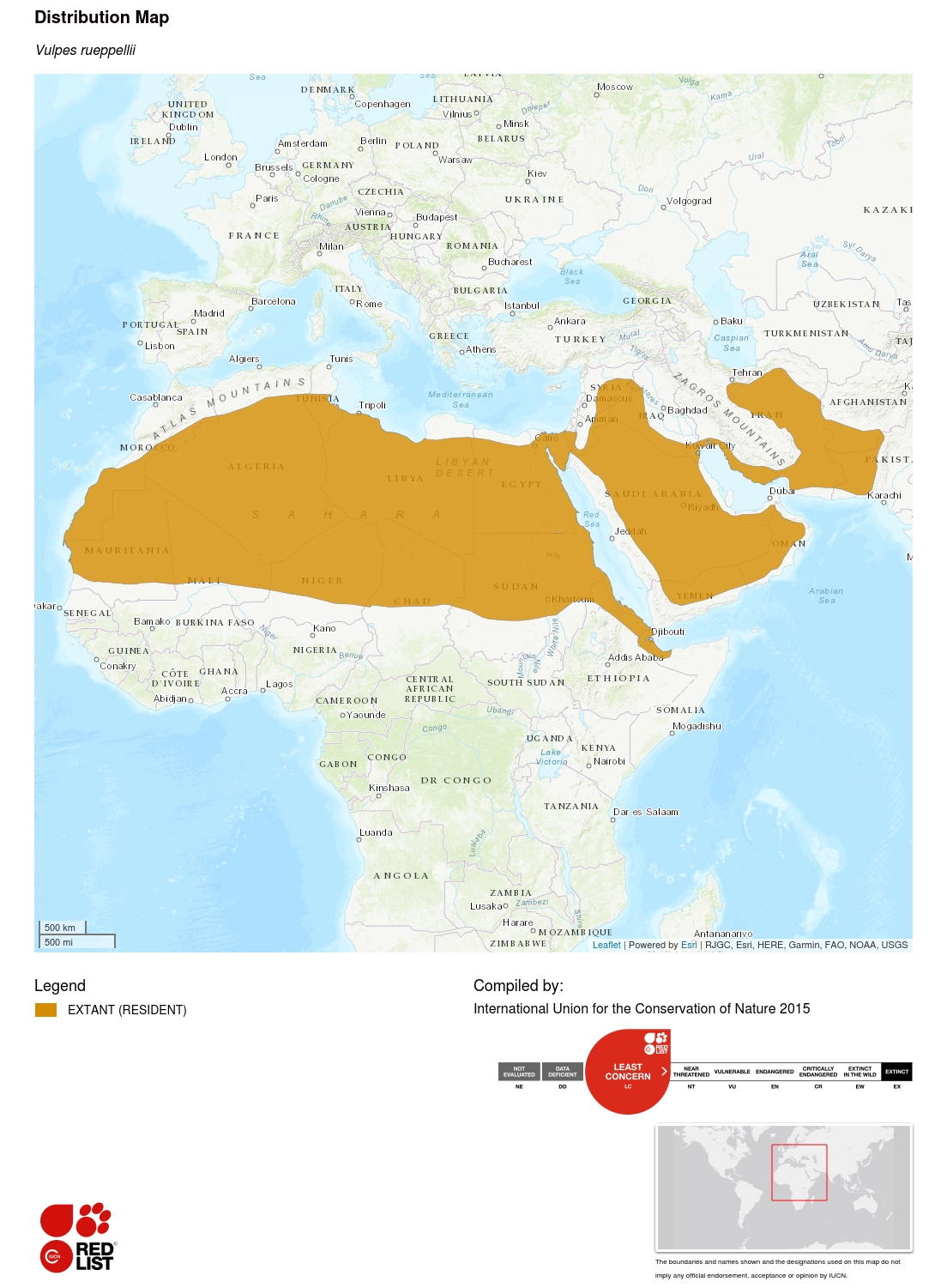 There is no estimate of total population size. Densities of Rüppell's Fox are usually low, but seem higher in areas where food is more freely available (for example, near human settlements; Valverde 1957, K. De Smet pers. obs.). In Mahazat as Sayd Reserve (2,244 km2) in Saudi Arabia, densities of 0.68/km2 were recorded, but lower population estimates outside the fenced reserve indicate that the species may be vulnerable in the over-grazed, human-influenced landscape of central Arabia (Lenain 2000). In the same reserve, Olferman and Hendrichs (2006) trapped 150 Rüppell’s Foxes during 12 trapping sessions producing an estimated density of 0.25-0.62/km2 with corrected figures, for adults only, of 0.16-0.17/km2.

Their typical habitat includes sand and stony deserts. In United Arab Emirates, Rüppell’s Foxes occur in a variety of desert habitats including sand sheets, sand dunes, gravel plains and inter-dune sabkhas (Murdoch et al. 2007). In Saudi Arabia, they have been found in open and stony habitats often with sparse vegetation cover, including a few herb and grass species (Fagonia indica, Indigofera spinosa, Tribulus spp., Stipagrostis spp. and Panicum turgidum) that receive little rainfall (~100 mm per year; Lenain 2000). In Mahazat as Sayd, Rüppell’s Foxes showed a clear preference for open stony habitats (gravel or basalt) with short grass or low shrubs (Olferman and Hendrichs 2006). In the western empty quarter of Saudi Arabia, Rüppell’s Foxes are the most frequently encountered carnivore, denning primarily in the firmer substrates of the interdunal gravel valleys, and penetrating to at least 100 km into the sand sea (T. Wacher pers. obs.). On the northern fringe of the Sahara, foxes may be found in similar areas receiving less than 150 mm annual rainfall. In Morocco and Western Sahara, the general habitat presents sparse to very sparse vegetation cover, dominated by small bushes and large grass tussocks (Hammada scoparia, Panicum turgidum, Fagonia spp.) mostly concentrated in wadis (with Acacia spp., Argania spinosa, Balanites aegyptiaca, Maerua crassifolia and Capparis decidua trees). In Niger (Dragesco-Joffé 1993) and Morocco (F. Cuzin pers. obs.), the species avoids large sand dune areas, where the Fennec Fox is the only other reported canid species; however, in Algeria, they also occur in large ergs (De Smet 1988). The Rüppell's Fox also lives in coastal areas, with extremely sparse vegetation and without any trees. It is able to survive in areas with little available water, as in central Saudi Arabia (Mahazat as-Sayd) on the fringes of the Arabian Empty Quarter (Lindsay and Macdonald 1986, Murdoch et al. 2007), in Algeria (De Smet 1988) and in Western Sahara, where observations do not show any relationship with the distance to the nearest available water (F. Cuzin unpubl.).

Rüppell’s Foxes occupy home ranges that have been reported to average 30.4 km2 in Oman (Lindsay and Macdonald 1986), and 16.3 km2 (Olfermann 1996) and 10.2 km2 (Lenain 2000) in Saudi Arabia. Foxes appear to form monogamous pairs that share a home range. Rüppell’s Foxes overlap widely with Red Fox in many places, but seem to be better adapted to more arid areas that are marginal for Red Fox (Wacher and Attum 2006). Brito et al. (2009) identified probable sympatry between the two species along a relatively narrow stripe spreading from coastal southern Morocco to northern Egypt.

Threats include direct and indirect persecution by hunting and indiscriminate use of poisons. In some regions, foxes face persecution for their perceived impact on game species like Houbara Bustard (Chlamydotis undulata) and livestock (Murdoch et al. 2007); in Saudi Arabia, individuals have been seen hanging by the neck from road signs, suggestive of persecution by humans (Cunningham 2009). In Israel, the species is on the verge of extinction due to competitive exclusion by Red Foxes that are expanding their range following expansion of human settlements in the Negev Desert (Yom-Tov and Mendelssohn 1988); similarly, in the Arabian Oryx Sanctuary, Oman, and parts of UAE at least, it has been displaced around settlements by the Red Fox (Mallon and Budd 2011), and recently signs of a similar process have been observed through extensive camera trapping studies in the western empty quarter of Saudi Arabia (C. Barichievy and T. Wacher pers. obs).

They are very occasionally killed for food, but rarely hunted for sale of furs.

Legal protection
It is not listed on the CITES Appendices. State-level protection varies: in Israel, the species is fully protected by law, and no hunting, trapping or trading is allowed, whereas in Morocco, according to the annual hunting decree, Rüppell's Foxes and Red Foxes may be hunted during the whole year, as they are considered pests.

Presence in protected Areas
It occurs in a number of protected areas across its wide range (see Cuzin and Lenain 2004, Cuzin 2013).

Presence in captivity
Rüppell's Foxes are held in captivity, including in the Rabat Zoo, Morocco; the Dubai Zoo, and the Breeding Centre for Endangered Arabian Wildlife in Sharjah, United Arab Emirates. Attempts to breed Rüppell's Foxes generally have not been very successful (Ginsberg and Macdonald 1990), although they have been successfully bred in the Hai Bar Breeding Centre, Eilat, Israel (E. Geffen pers. comm.).

Research needs
The status and ecology of populations outside of the Arabian Peninsula remains largely unknown. Monitoring of populations in well-established protected areas throughout the species' range is encouraged. There is scope for detailed study of competition between Rüppell's and Red Foxes.

Threats include direct and indirect persecution by hunting and indiscriminate use of poisons. In Israel, the species is on the verge of extinction due to competitive exclusion by Red Foxes that are expanding their range following human settlements in the Negev Desert (Yom-Tov and Mendelssohn 1988), and competition with Red Fox is believed to be a problem elsewhere in the range. Rarely hunted for food or for sale of furs. However, in some regions, foxes face persecution for their perceived impact on game species like Houbara Bustard (Chlamydotis undulata) and livestock (Murdoch et al. 2007).