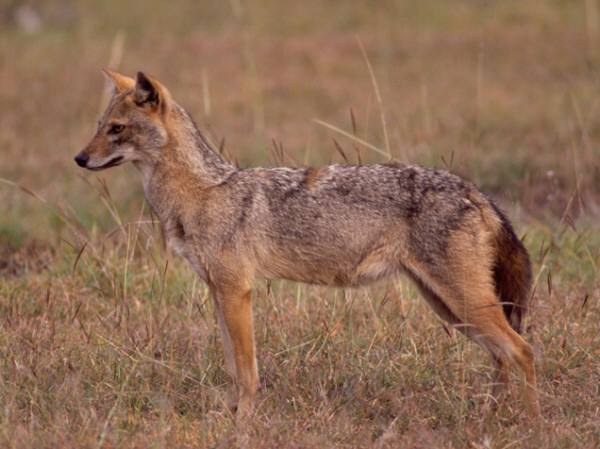 The Golden Jackal is a widespread species that is fairly common throughout most of its range with high densities observed in areas with abundant food and cover; its tolerance of different habitats, including those altered by humans, and omnivorous, opportunistic diet means that it can live in a wide variety of habitats. Although likely to be slowly declining in some parts of its range, it is also undergoing range expansions in other areas. There are no threats known to be causing major range-wide declines that would warrant listing in a threatened category or even as Near Threatened and the species is therefore listed as Least Concern.

In Europe, the Golden Jackal was historically limited to coastal regions along the Mediterranean and Black Sea (Krofel et al. 2017). During the 19th century, expansion started in south-eastern Europe. Following a period of decline and subsequent recovery, they have been expanding their range northwards and westwards in many parts of Europe during the 20th century (Kryštufek and Tvrtkovi? 1990, Kryštufek 1999, Arnold et al. 2012, Trouwborst et al. 2015, Krofel et al. 2017). In recent years, they have both recolonized parts of their range where they were previously present, such as the former Yugoslav Republic (FYR) of Macedonia (Ivanov et al. 2016), as well as expanded their range into new countries where they probably mostly occur as vagrants for now, such as Switzerland, Poland and Germany. Presence in Europe, either as native or vagrant, follows Trouwborst et al. (2015) and Krofel et al. (2017), with the exception of Slovakia where they are now considered native (after Slamka et al. 2017), and mapped range follows Trouwborst et al. (2015) in mapping only areas of (current) permanent presence. In early 2016, a Golden Jackal was camera-trapped in the Veluwe Nature Reserve in the Netherlands, the first record for this country; there have also been several recent (since 2015) records from Denmark and at least one record from Haute-Savoie in France in 2017. The expansion thus appears far from being complete and the distribution range of the species is predicted to continue to increase towards the west and north of the continent.

Southwards, Golden Jackals range into Turkey, Syria and Iraq into the Arabian Peninsula, where the species is today restricted to a small part of eastern Saudi Arabia in the Hofuf area and around Al Asfah; however, there are also records from the last few decades from Qatar (Hellyer 2009) and Jordan (Amr et al. 2004) and it is possible that it may occur in Kuwait (Mallon and Budd 2011). Gasperetti et al. (1985) listed it for Yemen, based on records from the end of the 19th century (see also Al-Safadi 1990 and Al-Jumaily 1998), but Mallon and Budd (2011) remarked that these reports are unconfirmed and likely to be erroneous or refer to released or imported animals. There are no confirmed records for UAE. The species does occur in Israel, and Viranta et al. (2017) remark on a single Canis aureus haplotype in their study from the Sinai Peninsula, Egypt, noting this could denote the presence of hybrids with Canis lupaster.

The Golden Jackal then ranges eastwards through Iran, Central Asia and the entire Indian subcontinent east and south to Sri Lanka, Myanmar and parts of Indochina (Jhala and Moehlman 2004). Duckworth et al. (1998) reviewed what was known of the range of the species at the time in Indochina, noting its presence in low-lying regions of eastern Cambodia, southern Vietnam and southern Lao PDR. It has subsequently been recorded in central Lao PDR (Nakai plateau, pre-inundation; Dersu 2008). 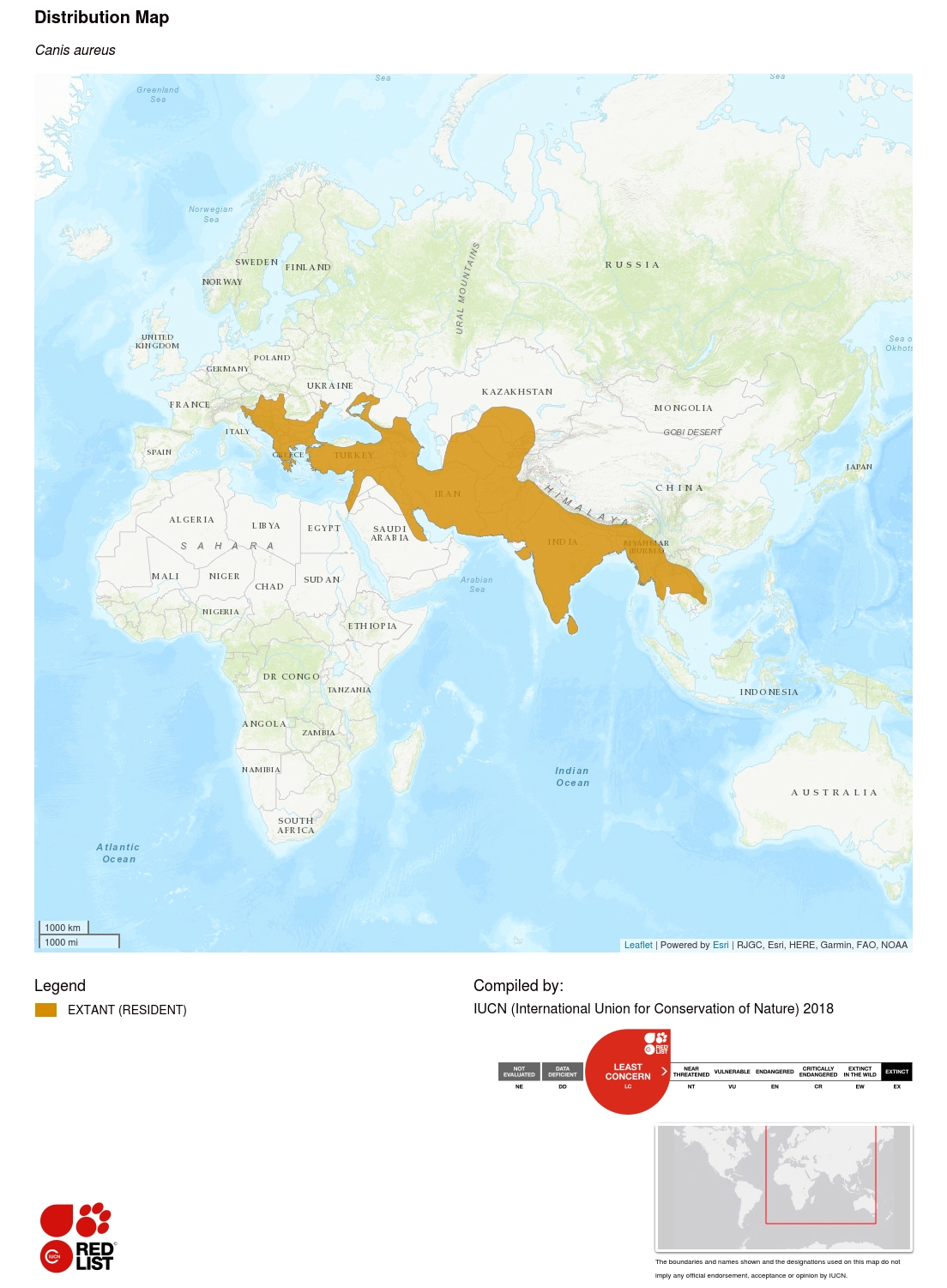 The Golden Jackal is fairly common throughout most of its range. High densities are observed in areas with abundant food and cover. In Europe Golden Jackal typically occurs in densities around 1 family group per km² with recorded range of 0.1-5 family groups per km² (Banea et al. 2012; Šálek et al. 2014; M. Krofel, unpubl.). Population size for Europe was roughly estimated at 70,000 Golden Jackals (?irovi? et al. 2016). There is a lack of knowledge on population densities for most areas in the eastern extent (particularly Vietnam and Lao PDR) where the species appears to be scarce and localized. In India, jackal populations achieve high densities in pastoral areas such as Kutch, Maharashtra, Rajasthan, and Haryana. Based on intensive observations on breeding pack units and radio-collared individuals, jackal densities in the semi-arid Velavadar National Park were estimated between one and two jackals per km² (Moehlman and Jhala 2004); see Sharma (1998) for densities quoted for the Thar Desert in India. Based on known density estimates for parts of India and considering that about 19% (i.e., about 637,000 km²) of the geographical area of India has forest cover with jackal populations (and that jackals are also found outside forested habitats), a minimum population estimate of over 80,000 Golden Jackals would not be unreasonable for the Indian sub-continent. However, there is also evidence for recent declines in some parts; for example, they have shown a 50% reduction in detectability in the southern parts of the Western Ghats (Pillay et al. 2011).

Due to its tolerance of dry conditions and its omnivorous diet, the Golden Jackal can live in a wide variety of habitats, exceeding 2,000 m in elevation, ranging from semi-arid environments to forested, mangrove, agricultural, rural and semi-urban habitats in India and Bangladesh (Clutton-Brock et al. 1976; Prater 1980; Poche et al. 1987; Y. Jhala, pers. obs.). In Lao PDR, Vietnam and Cambodia the species is strongly associated with lowland deciduous dipterocarp forests, but is also found sometimes in highly degraded and opened-up areas of other forest-types. These typically support many people and it is possible that they would be used more extensively if persecution of carnivores within them were not so heavy (Duckworth et al. 1998). In Europe, the species prefers cultivated areas and wetlands in lower elevations and heterogenous habitats with adequate cover for hiding and breeding (Šálek et al. 2014). Jackals are opportunistic and will venture into human habitation at night to feed on garbage; garbage dumps also regularly attract and support high jackal densities (?irovi? et al. 2016). Moderate human activity may benefit the species in areas where persecution of carnivores is at most only relatively light, as it tends to increase availability of food (carrion, refuse, and animal dung) (Giannatos 2004). An especially important source of food in Europe are slaughter remains and other animal waste from livestock, which represents approximately 40% of jackal diet across the continent (?irovi? et al. 2016).

The absence of larger predators like the Grey Wolf (Canis lupus) seems to favour the recovery of the species in many areas (Kryštufek and Tvrtkovi? 1990; Giannatos 2004) and indeed extermination of wolves has been implicated as a major reason for the expansion of jackals throughout Europe (Krofel et al. 2017; Newsome et al. 2017). Similarly, in Southeast Asia the Dhole (Cuon alpinus) may suppress jackal numbers, so that jackal numbers increase locally when dhole numbers decline (J. F. Kamler, unpubl. data). It has also been hypothesized that climatic changes due to global warming will reduce barriers to the dispersal of jackals, such as long winters with severe snow cover (Arnold et al. 2012).

At least in the European part of their range, Golden Jackals appear to be staging a come-back, with marked expansion into areas where they were previously present but disappeared, as well as into countries where they have not previously been recorded (Arnold et al. 2012; Trouwborst et al. 2015; Krofel et al. 2017). There is a paucity of information from the more easterly parts of the species' distribution range, but there is some evidence of localised declines (e.g. in the southern Western Ghats due to agriculture, logging and human settlements; Pillay et al. 2011). In Lao PDR and Vietnam, and to a lesser extent Thailand and Cambodia, it is likely that heavy persecution, especially widespread indiscriminate snaring, keeps jackal populations much lower than they would otherwise be (W. Duckworth and J.F. Kamler pers. comm.); on the other hand, in Israel and in some parts of Europe it appears that hunting does not affect jackal populations (Kapota 2014). In Europe, Israel (e.g., the Golan Heights; Yom-Tov et al. 1995) and elsewhere (e.g. parts of Bangladesh; Poche et al. 1987), Golden Jackals are sometimes perceived as a pest species (e.g. where there are garbage dumps or abattoir dumps, jackal numbers are increasing). Equally, the species has an acknowledged role in removing high quantities of animal waste and crop pest rodents in European human-dominated landscapes (?irovi? et al. 2016).

There is no significant trade in Golden Jackal products, although skins and tails are very occasionally sold. In some regions (e.g. Croatia), there is also commercial some limited trophy hunting for foreign hunters.

Legal protection
The species is included in CITES Appendix III (in India). Jackals feature on Schedule III of the Wildlife Protection Act (1972) of India and are afforded the lowest level of legal protection (mainly to control trade of pelts and tails). However, no hunting of any wildlife is permitted under the current legal system in India. In Europe, the Golden Jackal is included in the Annex V of the Habitats Directive, 92/43 EC as a species of Community interest. At the national level in Europe, their status under domestic law varies amongst the 26 countries west of the Black Sea where the species’ presence has been confirmed; for example, in 14 countries, Golden Jackals may be hunted in accordance with national hunting legislation, which in many cases includes a defined hunting season (e.g. Montenegro, Romania, Slovakia, Slovenia) (see Trouwborst et al. 2015 for a full review, including a discussion of some of the management confusion due to recent range expansion and inadequate legal interpretation).

Captivity
Golden Jackals are common in many zoos in India and a few in Europe, but otherwise are not commonly held in conservation breeding programmes.

Gaps in knowledge
The status of the species in the Middle East requires clarification. Little quantitative information is available on jackal densities in most parts of Asia, habitat use, and ranging patterns in relation to food availability. Information on ecology, dispersal, survival and mortality factors of adults, pups and dispersing individuals is needed, since most of the previous studies have been done in Africa, where studied animals are now recognized as a separate species.