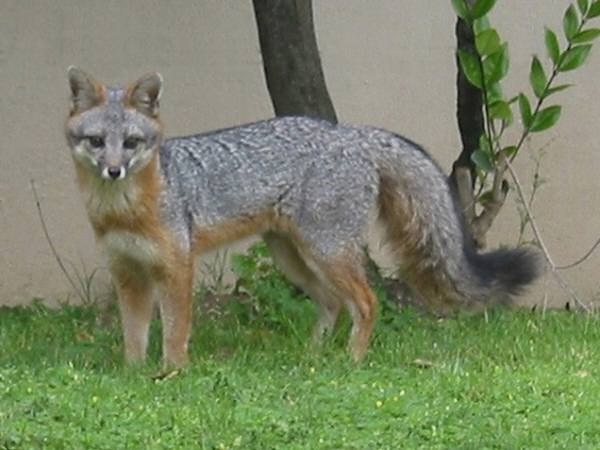 The Grey Fox is widespread in forest, woodland, brushland, shrubland, and rocky habitats in temperate, semi-arid and tropical regions of North America, and in northernmost montane regions of South America. Grey Fox are also increasingly common in urban environments. Available evidence suggests that Grey Fox numbers are probably stable across their range, and not subject to any range-wide threats causing marked declines in the overall population size despite being trapped for their pelts in many parts of their range. Available evidence suggests they are frequently incidentally captured when other more highly sought furbearers (e.g., Bobcat) are targeted.

The Grey Fox ranges widely from the southern edge of central and eastern Canada, and Oregon, Nevada, Utah and Colorado in the United States south to northern Venezuela and Colombia; and from the Pacific coast of the United States to the Atlantic and Caribbean oceans. The species is not found in the northern Rocky Mountains of the United States, or in the Caribbean watersheds of Honduras, Nicaragua, Costa Rica and western Panama (Fritzell and Haroldson 1982, Fuller and Cypher 2004). They have expanded their range in recent decades into habitats and areas either formerly unoccupied or from which they were extirpated.

The species is generally common, but appears to be restricted to locally dense habitats where it is not excluded by sympatric Coyotes (Canis latrans) and Bobcats (Lynx rufus) (Farias 2000b).

In eastern North America, the Grey Fox is most closely associated with deciduous/southern pine forests interspersed with some old fields and scrubby woodlands (Hall 1981). In western North America, it is commonly found in mixed agricultural/woodland/chaparral/riparian landscapes and shrub habitats. The species occupies forested areas and thick brush habitats in Central America and forested montane habitats in South America (Eisenberg 1989). Grey Foxes occur in semi-arid areas of the south-western USA and northern Mexico where cover is sufficient. They appear to do well both within and on the margins of some urban areas (Harrison 1997, Castellanos et al. 2008).

There are no major range-wide threats to the species, but extreme habitat loss, fragmentation, and degradation may be problematic in regions where human habitation is increasing rapidly and habitat is converted for agricultural, industrial, and urban uses. However, they are overall relatively adaptable and have become increasingly common even in urban environments. Grey foxes have been involved in some large die-offs due to canine distemper virus in parts of their range, and may also be affected by canine parvovirus and rabies.

Because of its relatively lower fur quality compared with other species, commercial use of the Grey Fox is somewhat limited. However, 90,604 skins were recorded taken in the United States during the 1991 and 1992 season (Linscombe 1994). In Mexico, Grey Foxes are frequently sold illegally as pets (Fuller and Cypher 2004).

Legislation
Not listed in the CITES Appendices. The Grey Fox is legally protected as a harvested species in Canada and the United States (Fritzell 1987).

Presence in captivity
A number of foxes are held in captivity, although there may be more in the hands of private collections/individuals who do not report to ISIS. Grey Foxes appear to fare well in captivity and commonly are on display at zoos and wildlife farms.

Gaps in knowledge
Because of the relatively high abundance and low economic value of Grey Foxes, surprisingly little research has been conducted on this species. Basic ecological and demographic information is needed for each of the major habitats occupied by Grey Foxes, and there remains limited information available on the impacts of disease (such as canine distemper and canine parvovirus) in most parts of the range, although ongoing work in north-western Mexico will provide new and important information (R. List pers. comm. 2015). Also, additional research on the response of Grey Foxes to human-altered landscapes (e.g., urban environments) is needed. In general, extremely little is known about the status and ecology of Grey Foxes outside of the USA and Canada. The effects of Grey Foxes on populations of smaller vertebrates, especially in urban and suburban settings without larger predators, may be important.