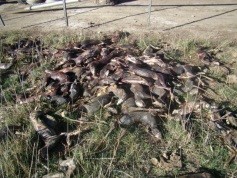 The southwest of Buenos Aires province is mainly dominated by the Argentine Espinal, an ecoregion defining the transition between the Pampas grasslands and the Argentine Monte woodlands. To favour ranching, which is the region’s mayor economic activity, natural woodlands have been heavily logged and fragmented and prey populations have been largely exterminated. The increasing encroachment of anthropic activities with natural ecosystem dynamics has created a context where carnivore (foxes and pumas) predation on livestock, especially sheep, is perceived as a major threat and retaliatory killing is the most common response. For management strategies to be effective, a thorough understanding of the human-fox conflict dynamics is necessary. However, the current crisis also requires urgent conflict mitigation measures as well as awareness activities. We will use camera trapping and radio tracking to understand the ecological component of conflicts. Throughout interviews, stakeholder workshops and the testing of different mitigation tools we aim to characterize conflicts, and their determinants, quantify the economic importance of losses, and identify the most promising mitigation measures. This project is led by GECM (Grupo de Ecología Comportamental de Mamíferos), UNS and CONICET, and HUELLAS ONG.