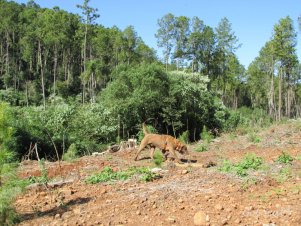 Proyecto Zorro Pitoco started in 2007, as a pilot study to test the efficacy of using detection dogs to study bush dogs in Misiones, Argentina. Since then, the Project has exploded into a collaborative, multipronged project in Misiones, Argentina with the Universidad Nacional de Misiones and the Ministerio de Ecología that is aimed at controlling threats that make the long-term survival of the region’s unique biodiversity at risk. Using noninvasive techniques (detection dogs, genetic analyses of scat, and GIS technology), the team has collected data on five carnivores (bush dog, jaguar, puma, ocelot, and southern tiger cat) and four prey that are heavily targeted by poachers (tapir, white-lipped peccary, collared peccary, and paca) across a variety of habitats that differ in integrity, proximity to humans, and degree of protection. This combination of noninvasive techniques has opened new doors in this biodiversity hotspot, including bush dogs. Several years of carnivore data were used to model a 400,000ha multispecies biological corridor in northern-central Misiones that maximizes animal mobility and minimizes the potential for human-wildlife conflict. On-the-ground work with landowners and government agencies are directed at making this corridor a reality. Ongoing work is aimed at expanding this corridor into the central-southern, a region where rapid human expansion and extreme habitat conversion threatens the flora and fauna.